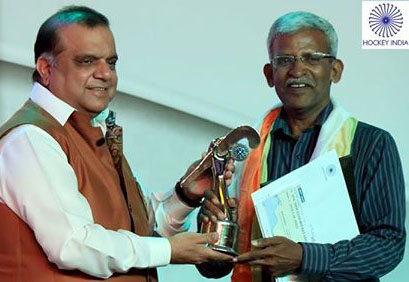 OTHL Founder: This is Nobel Prize for us

“This is Nobel Prize for us, hockey volunteers”, says K. Arumugam, the founder of uniquely titled Project ‘One Thousand Hockey Legs’ upon receiving Hockey India President’s Outstanding Achievement award for the Year 2014 in a glittering function last week end at the hands of none other than the HI President Dr. Narendra Dhruv Batra himself.
Hockey India celebrated its last year’s hockey activities with a high-end bang, ‘Hockey India Annual Awards’ function on Saturday, the 28th March with much fanfare in the Lalit, a five-star destination by now for Delhi hockey community.

“I did not expect. It was a pleasant surprise. When my name came I thought am one of the nominees. It took someone sitting nearby to make me understand I am the winner and called to the dais” visibly elated K. Arumugam, Founder and CEO of the NGO, recollects the winning moments for the benefit of s2h readers.

“I just thrust my Tab into the hands of a journalist sitting next to me and rushed to the dais, amidst a chorus of applause especially from women hockey team whom I cut through on way to the hugely lit podium”. 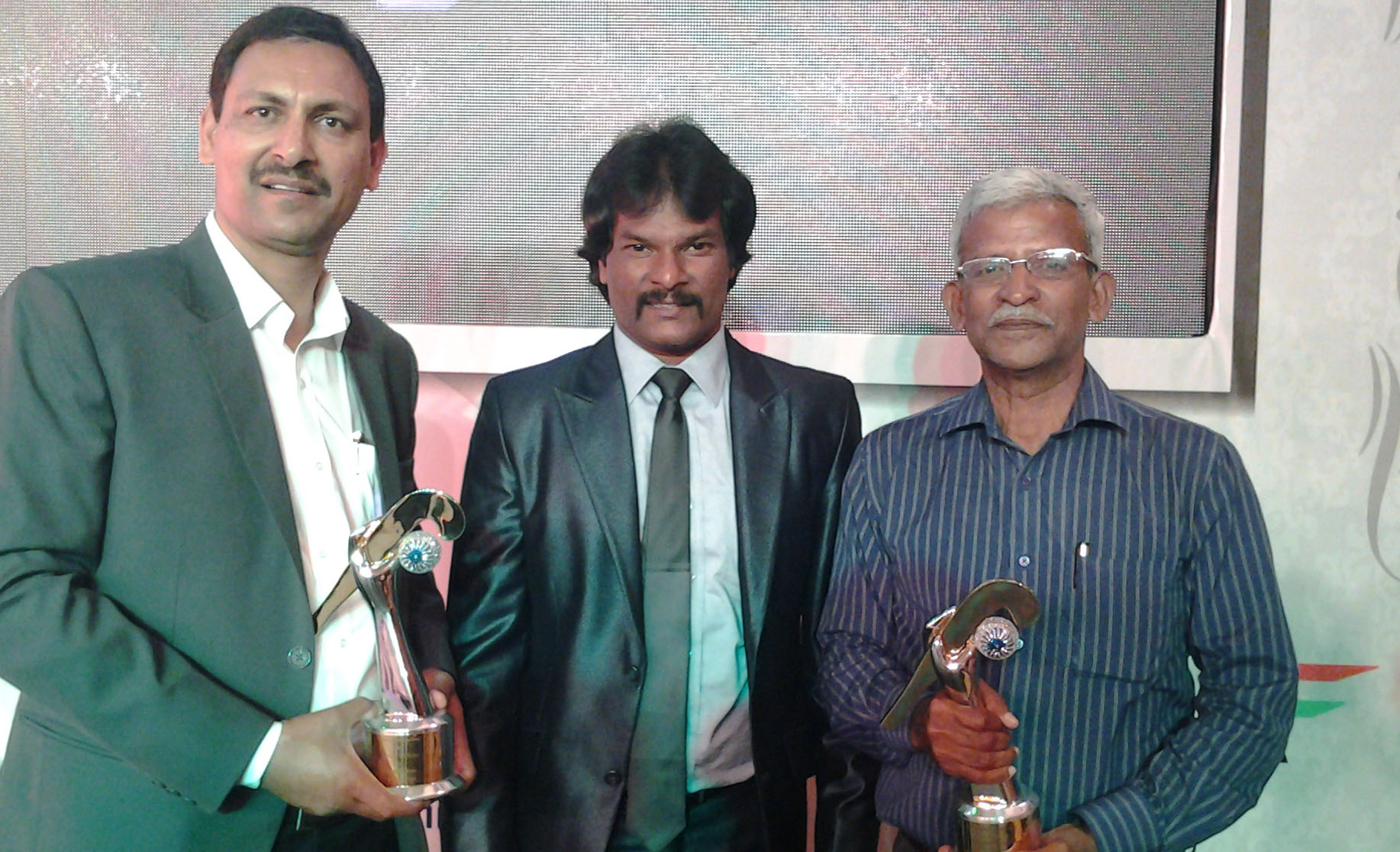 “If I sit back and remember the award, it is like Nobel Prize for me. Because, this is by far the biggest recognition for my work”.

“With this, most people who do not take my work seriously and for some who do not understand my work, will consider my strange but significant project with the seriousness it deserved”

“My passion of starting and running hockey teams in schools -- especially where low profile and poor kids study -- in a structured way has been recognized. I am extremely happy, happy for me, happy for my kids, and volunteers”.

He dwelt a length on why and how the award is different and significant in the evolution of first-ever pan Indian hockey NGO in India.

“Normally, India has a habit of recognizing its own achievers only after some other countries did, like recent Nobel prize winner from India. In my case, hockey’s own parent body has honoured me, recognized my work in such a grand way as it had been, that too in front of both men and women nationals teams, famed coaches and former players including triple Olympian Balbir Singh. What more did I need?”, asks the grateful winner.

“It’s a home award in front of home audience, and it is great”, Arumugam elaborates on how he considers the significance of the conferment of the award. 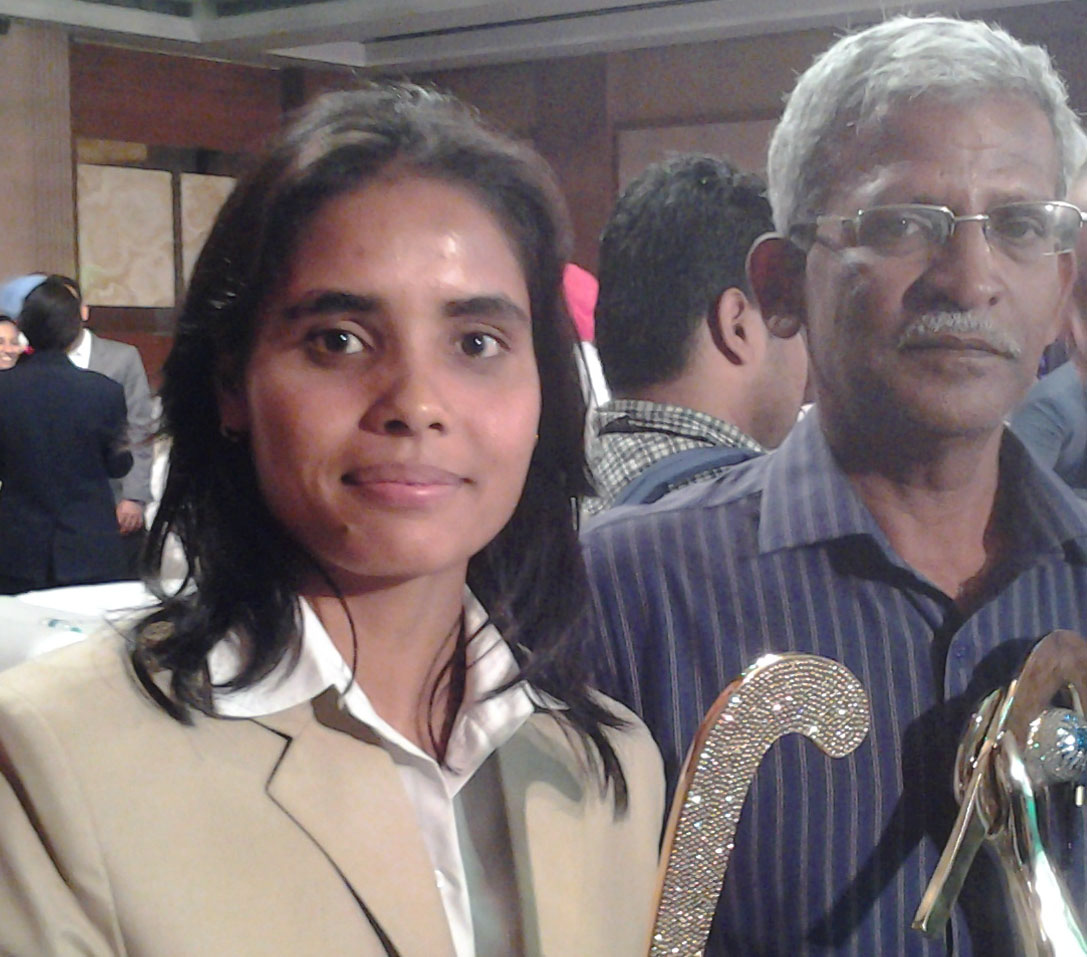 The NGO Hockey Citizen Group was started in December 2008, months after two incidents. First, India’s failure to qualify for the 2008 Olympics, which many in India considers a Black Day for Indian sports. Secondly, the author of 13 books suffering a heart-attack and undergone angiography.

Surviving a heart-attack Arumugam dedicated his second life to hockey, and added the NGO feather in his cap, the other self-declared responsibility being Author, Publisher, Photographer, hockey-traveler and editor of www.stick2hockey.com.

After Dronacharya coach Harendra Singh was adjudged the Coach of the Year, came the turn of announcing Outstanding Achievement.

The award carried a beautiful trophy, a cheque of Rs.5 lacs (USD 7700), a tricolour traditional shawl, besides a citation.

On asked whom he would like to dedicate the award, pat came the reply: “My hockey kids, who never complain of minimum things I provide, volunteers and my family”.

“It serves two purposes: improve hockey in schools and uplift the profile of socially weaker and disadvantaged kids”.

He candidly agrees the second part is one that drives him most at present.

On the strange name One Thousand Hockey Legs, his perspective is as under:

“I want to get reminded of my target all the time, because I want to achieve my target at any cost”, he doesn’t mince words.

The target the NGO chief means is bringing 500 new kids to the ambit of hockey in each city of India. However, in practice only 20 polished boys or girls from single school counted per school, though the school may have three age group teams (Sub-Jr, Junior and Senior).

“The idea is to start and run hockey teams in at least 25 schools in each city. Delhi, where I live, is the first city to achieve the target, and its not a mere coincidence the NGO got the award in the here (Delhi)”.

According to the founder, the following are the five major milestones for the OTHL since started exactly six years ago.

1. Hockey India’s affiliation that enabled the NGO to field its combined team in the Sub-Junior National Championships. Year 2013.

Though he thanks many people and organizations in his schools hockey journey, one can surmise the following as most important ones.

Dr. Narendra Dhruv Batra for not only conferring the award to the NGO but also conceptualizing it. Many thought this category of award is meant for players, coaches or HI’s State Associations. But he saw hockey beyond routine, included wide section of hockey community such as this NGO. This is a good thinking.

The entire machinery of Hockey India, who always accord enormous support and sympathy for the NGO in dealing various aspects.

Volunteer like Himanshu Dhiman (IIT Bombay hockey team captain, who did not hesitate to offer Rs.1 lac demand draft when Sports Authority of India came out with a Community Connect Scheme and the NGO did not have the kind of money to apply. The earnest money is struck with SAI is a different matter though.

Arjuna award winner Viren Rasquinha, only player so far, to come forward on his own and present a cheque of Rs.10k; Dronacharya award winner Harendra Singh --who always speak high of the NGO -- and presented a video camera to kids to improve coaching; volunteer Shashank Gupta without whose zeal we could not have opened many frontiers; ever reliable Olympian MK Kaushik, who got the NGO its first school in otherwise stubborn Delhi; IITian Prashanth Pinnamaneni, who just came to meet my son and his friend at home but turned out to be a serious undefined volunteer who ran Delhi Half-marathon for fund-raising; Pragya Srivastava and Anup Tiwari who do designs for us for almost no fee; the duo of V. Ravichandran and PK Mohan who donated fixed amount in the first three formative years; Dronacharya AK Bansal and national stadium coaches for throwing gates of National Stadium open in the first year of Delhi OTHL; Youngster Param, a casual onlooker during our public park practices who later turned out to be our Tally-man who charges nothing for his services but a T-shirt; Manoj Gupta, a hockey fan who does auditing and Income Tax related works for free since five years; OTHL Fan Harsimran Virk, volunteer Navneet Tyagi, a long standing associate, Rakhee Sharma for a brisk and brief spell, Principal Anil Kispotta and PTI Kulwinder Singh of Saket and Begumpur schools respectively and many more.

”My wife Shanthi Natarajan, daughter and son are pillars of strength of whatever I do, and they deserve every bit of adulation that comes my way. I steal their times for my works”

On future he envisions bringing quality to the quantity he able to garner so far in all the five cities the NGO operates.

“This multi-task is an uphill task, but achievable. We have got right kind of motivation with this award to take up sterner tasks”, concludes the optimistic hockey soul, whose NGO has so far introduced about 2400 kids to the sport of hockey and has got the biggest recognition last Saturday in a star-studded function.