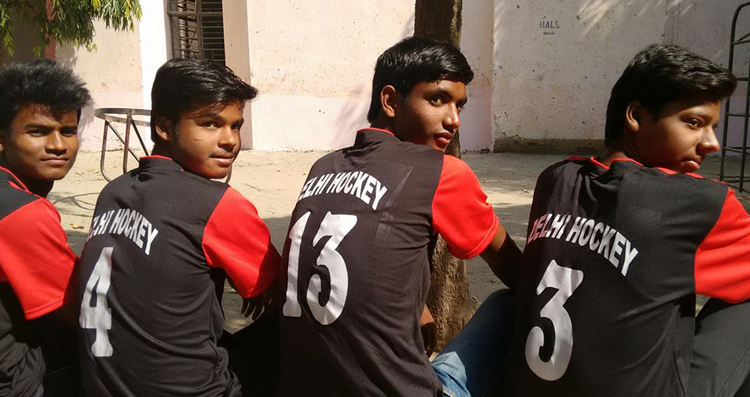 The team has left for Raipur, Chhatisgarh, where the sixth Hockey India Junior National Championship (Div B) will be held from 4th May.

About a hundred boys attended the selection trials held at Shivaji Stadium out which a panel of selection committee pruned the list to 30. Seven of our boys were in the second pruned list of 22.

Goalkeeper Deepanshu, midfielder Sunil Kumar and defender Sonu cut the ice for the last pruned list but failed to clear the last hurdle.

Of the four OTHL boys made it to the senior side, Pawan is an established defender, now in 12th standard. Lanky Pawan is believed to be coolest guy in the Delhi circuit.

Sushil Chauhan, a brilliant student with Commerce, is an emerging brain, and packs his commonsense with astute moves at fulcrum position.

Kishore Arya is a permanent left-half in all our Combined OTHL teams, having been part of two Sub-Junior Nationals in the past. He is in the eleventh class. Athletic and hardworking, he is a delight on the field.

Kanhaiya, who for some is a struggling player, is a tenth class student of Govt Boys Senior Secondary School, Mehrauli. He represented Delhi and Citizen Hockey XI last year as well.

The team has goalkeepers in Lakshya and Pokriyal and has a good forward line up.

Delhi State is slowly seen as a power to reckon with. Delhi Hockey’s senior team won the bronze recently at the Nationals.

This despite the fact that play field availability in Delhi, despite the city has five turf grounds, is anything but miracle!

Mahesh Dayal, Secretary, Delhi Hockey, wished the team a success on the eve of team’s departure on Sunday.