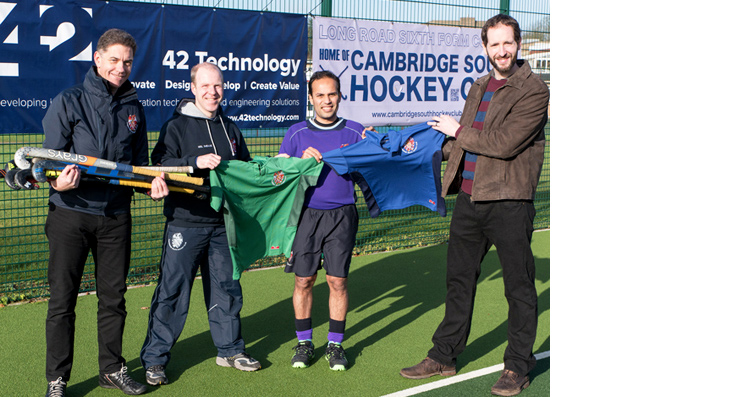 The club is fund raising through quiz nights and member donations and, with the support of its existing club sponsor 42 Technology, is also providing the charity with sticks and equipment. Two sets of new playing shirts, printed by club kit supplier Gilmour Sports, are also being sent to India.

The club’s link with the charity started when Bhavdeep Virdi, a player in the Men’s 1st XI, visited the One Thousand Hockey Legs programme while on a return trip to India. He was so inspired by the charity’s work, which is now running hockey teams in 80 schools across five cities in India, that he has encouraged his Cambridge club mates to get involved in supporting the organisation.

“Cambridge South is delighted to be able to help children in India to enjoy and play hockey too. These children often have parents who work in very low paid jobs with little spare money for activities such as sport and where One Thousand Hockey Legs can step in to help give their children a positive focus, away from bad company, drugs or other temptations. Bhav had the chance to take some coaching sessions during his recent visit and saw the huge positive impact that hockey can have for these kids,” said Neil Sneade, secretary at Cambridge South Hockey Club.

Jon Spratley, director at 42 Technology said: “42 Technology is already sponsoring the recently announced new junior section at Cambridge South and is pleased to extend our support to young hockey players in India too.”

Please contact Neil Sneade (secretary@cambridgesouthhockeyclub.co.uk) for further information on supporting One Thousand Hockey Legs (see www.onethousandhockeylegs.com) or to get involved in junior hockey in Cambridge.

The 42 Technology team of industry experienced physicists, engineers, industrial designers and analysts is expert at conceiving and developing novel products for efficient manufacture.

OTHL introduced hockey in these schools in 2011 out of six schools.