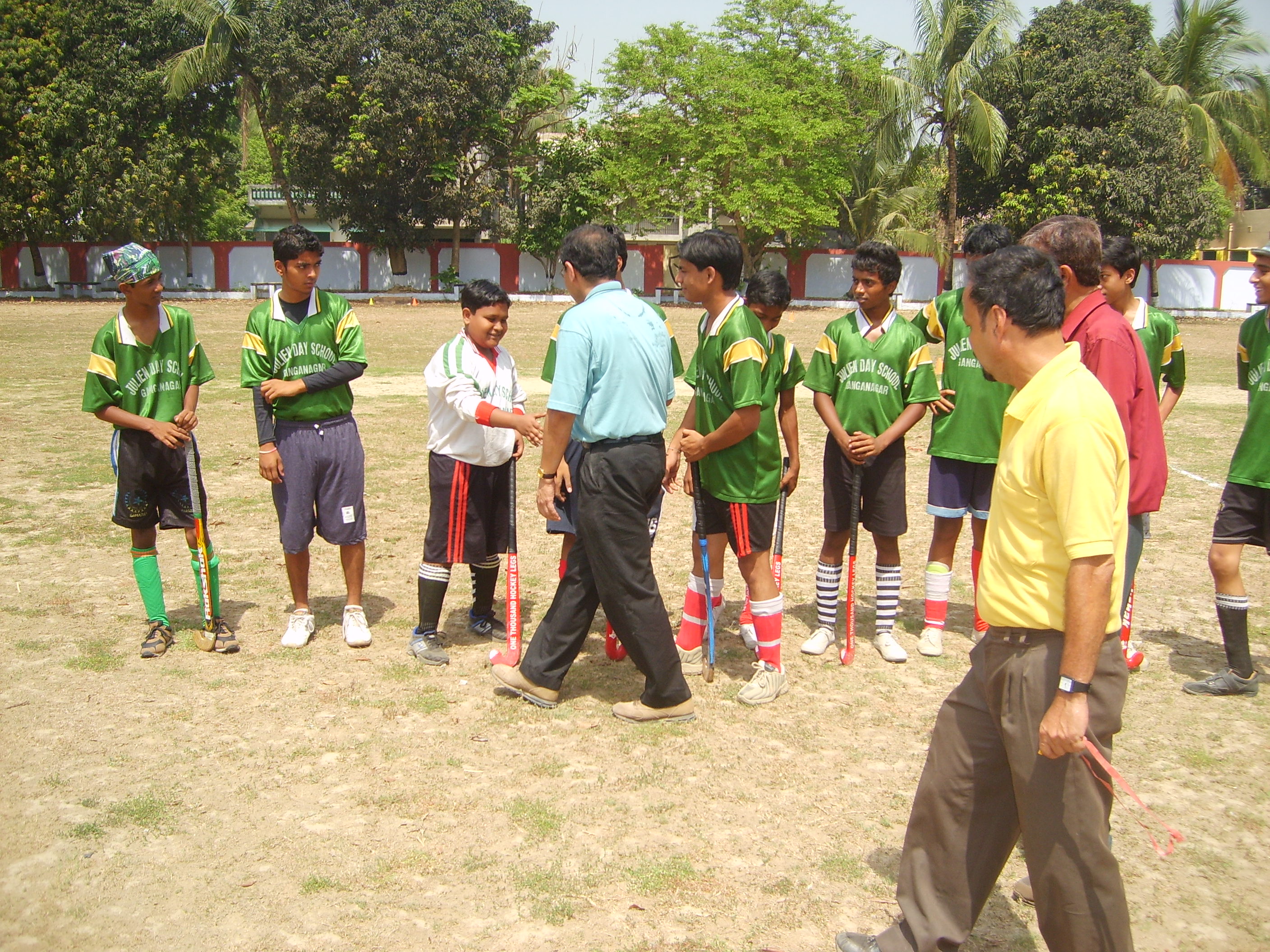 Dr. Shankar K Chatterjee meets the players in a match

The preparations for the OTHL hockey festival began in the middle of March 2010 when I started calling up all teams to look for a suitable dates for the programme and ensuring they were practicing twice weekly. Ideally this should have taken place during the winter months but the academic session played spoilsport with all the schools remaining busy with various exams. With such a high premium on academic pursuits these days and Hockey being at the bottom rung and belonging to the endangered species as far as sports are concerned; we had no other choice but to sit and watch the winter come and go. We wanted to give the kids a feel of the Astro Turf.

In this regard, I approached the Sports Authority of India’s Eastern Zone Headquarters with a letter from the Hockey Citizen Group on the 18th March.

However, after repeated visit and innumerous phone calls, meetings a number of officials along with written requests, series of ups and downs, days of excitements and disappointments, it was on 7th April, a day before the tournament, I figured out that it was a futile attempt. I was aghast with the kind of response and kept wondering the reckless attitude of SAI officials.

Keeping all personal feelings aside, I called up Mrs Tinku Chakraborty, Headmistress, Shanti Sangha Siksha Mandir, Parnashree, Behala and asked her whether we could have the afternoon matches at their school ground or not. She immediately agreed.

I was appalled at the amount of energy I had wasted after the Sports Authority of India to get a ground for hosting the Hockey festival and the ease with which I achieved the alternative. The difference was the boundless positive attitude which Mrs Tinku Chakraborty had. About the SAI, the less I speak the better.

It was at the suggestion of Mr Gurcharan Singh, my friend and the coach of Khalsa High School, Bhowanipore that I had arranged for distributing T-shirts with the OTHL logo on it to the participating teams as a memento and publicity material for our organization. Arranging for the banner to be printed, grounds to be marked, quiz material, ground configurations and match rules to be communicated to the teams was less of a challenge.

Unfortunately none of the participating schools or their PETs had e-mail accounts of their own, barring Mr Julian Glynn Broughton, who owns the Julien Day chain of schools. I had opened e-mail accounts for some coaches about two years ago when I began to get involved in Hockey promotion. Unfortunately they had remained unused. So I had to rely on courier services and personal messengers.

To make sure the schools got the Quiz material Shashank Gupta had sent couriers from Bangalore, and I had sent the same letters with extra information, i.e, ground configurations and game rules by courier to the very same people which were followed by the letters sent by personal messengers once again. 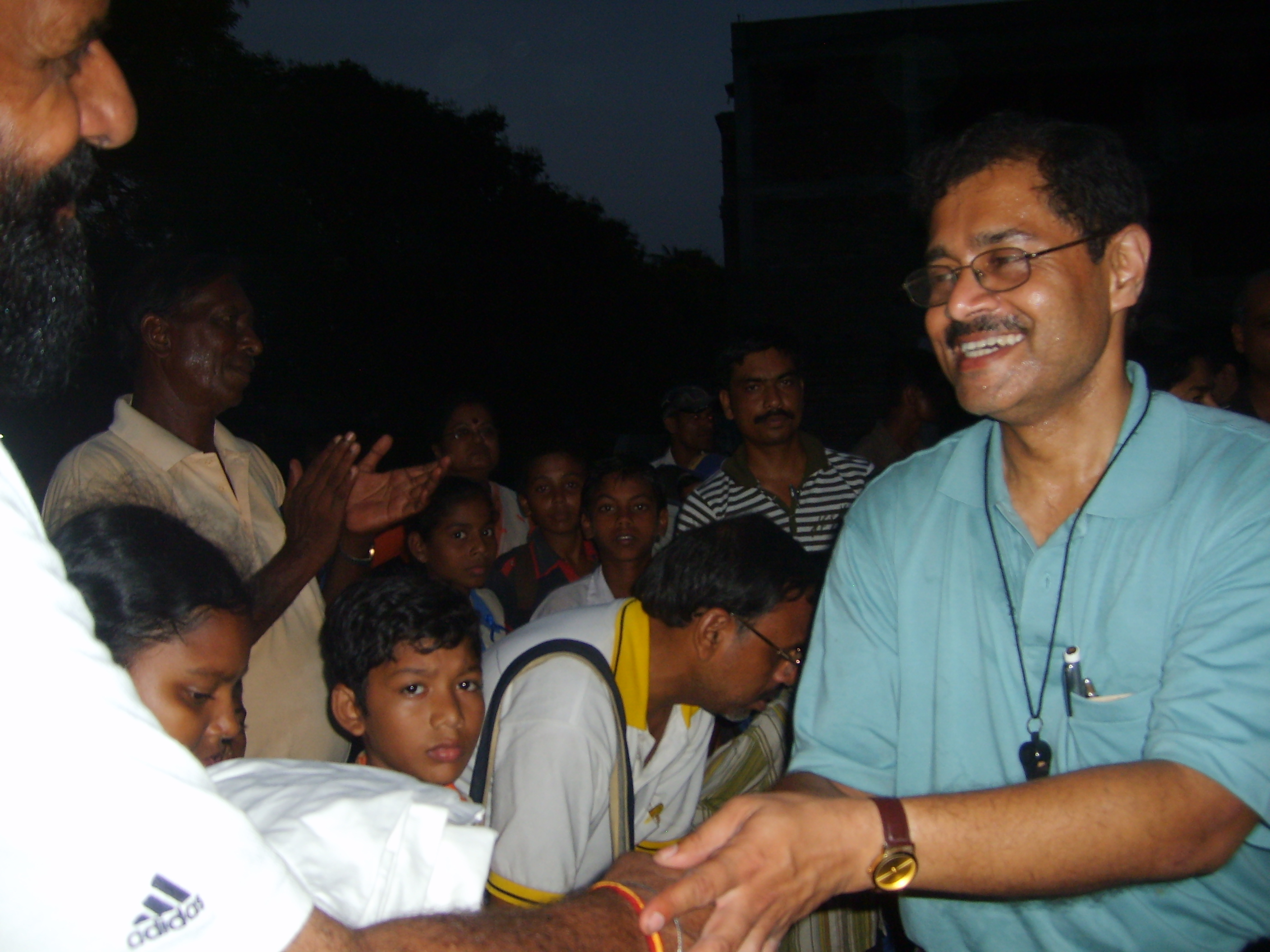 I had also designed makeshift detachable mini goals, half the size of the actual goal posts, made of PVC pipes and ply-wood boards which were dispatched to the Shanti Sangha Shiksha Mandir Girls’ School.

As the tournament unfolded, it became clear that the Schools Shanti Sangha Siksha Mandir, Parnashree, Behala, Kanaipur Sriguru High School and Brahmananda Keshav Chandra High School, Konnagar had taken to Hockey with all seriousness. The two Julien Day Schools, Ganganagar and Kalyani appeared a little rusty and short on practice.

The Khalsa kids were cosummate and their team functioned like a well-oiled machine and swept all opposition aside. It was also apparent that the children of the well-heeled city folks were not exactly eager to play hockey. On the contrary, the kids from poorer neighbourhoods took to the game with sincerity and played their hearts out. What emerges is that the idea of Hockey as a recreational sport is yet to take off. The poorer kids play Hockey seriously because in Hockey they see a glimmer of hope as far as getting a job is concerned, be it in the Police, Port Trust, Railways, Army or the various Paramilitary forces.

As far as our objective of promoting the culture of playing hockey is concerned, I guess the tournament has been largely successful in the area of Parnashree, Behala and so I would say Morepukur area of Rishra, Hooghly. Rishra had an old tradition of playing hockey, which was barely surviving for the last couple of years. There has been a boom of Hockey in the area after the OTHL programme stepped in and the two schools were recruited. We can also recruit one more school in the Rishra-Konnagar area and have some more matches there, which would improve the visibility of the game in the locality.

In hindsight it was a wise thing to have shifted the venue to the Shanti Sangha Siksha Mandir Girls’ School ground, which was fully visible to the entire surrounding neighborhood. The crowds swelled with each passing day as a result. It was to our great satisfaction that a healthy rivalry developed between the Shanti Sangha Siksha Mandir and Kanaipur Sriguru High Schools and it was their matches that pulled the maximum crowds. This happened on a ground where no organized hockey had been played before.